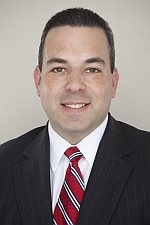 Jonathan H. Katz is a partner in the Princeton, N.J. office of Hill Wallack LLP and a member of the firm’s Community Associations Group. Jon concentrates his practice in the areas of community association law and general litigation, representing condominium and homeowners associations throughout New Jersey and eastern Pennsylvania.

In addition to these areas, Jon has significant experience in handling construction, real estate and general  litigation as well as transition negotiation and litigation.

In addition, Jon has authored several other articles and is a frequent speaker on community association issues at seminars and other events. He currently serves as the editor for Hill Wallack LLP’s Condo and HOA Law blog – www.condolawnj.com. Jon also has significant practical experience with community associations, having served on his homeowners’ association board of directors for eight years.

Prior to entering private practice, Jon served as the law clerk to the Honorable Philip S. Carchman, Superior Court of New Jersey, Appellate Division, and the Honorable Neil H. Shuster, Superior Court of New Jersey, Civil/General Equity, Mercer County. He earned his Juris Doctor from Rutgers School of Law – Camden in 2000 and his BA from Rutgers College in 1997.