On June 24, 2021, a high-rise beachfront condominium building in Surfside, Florida, partially collapsed, tragically killing nearly 100 people. Although the exact cause of the building collapse remains under investigation, it has been learned that the building was known to have major structural issues prior to its collapse. Additionally, the condo association did not have sufficient funds in reserve to properly and timely address those structural issues.

Many New Jersey common interest communities have similar multi-unit housing structures. A bill was introduced in the New Jersey Senate on June 2, 2022 (S2760) sponsored by Senators Troy Singleton (Burlington) and Linda R. Greenstein (Mercer and Middlesex) which would supplement the “State Uniform Construction Code Act” (UCCA) to require that certain covered buildings and plans be inspected and reviewed by a structural inspector during the building’s pre-construction, construction, and post-construction phases. In addition, this bill would supplement “The Planned Real Estate Development Full Disclosure Act” (PREDFDA) to assure that associations created under PREDFDA maintain adequate reserve funds to make certain required maintenance repairs to building components and common areas. A similar bill is expected to be introduced in the New Jersey Assembly soon.

This bill would require that an association created under PREDFDA commission a capital reserve study to identify and assess the adequacy of the association’s capital reserve funds to meet the anticipated costs associated with maintaining the structural integrity of the buildings which the association is obligated to maintain. In addition, this bill would require that the association creates and funds a plan (based on that study) to ensure adequate reserve funds are available to repair or replace one or more components of common elements and facilities which the association is obligated to maintain without need to create a special assessment or loan obligation. The bill would also allow an association’s executive board to adopt an assessment payable by the owners over one or more fiscal years or obtain a loan on such terms as the board determines to be reasonable, when necessary to fund the cost of corrective maintenance of the primary load-bearing system of the planned real estate development.

This Senate bill, and any Assembly counterpart, is not expected to be fully reviewed and debated in the legislature until later this year but given the public outcry resulting from the Florida tragedy and the similarity of buildings in our coastal state, it is likely that some form of this legislation will be voted on and passed into law. It is therefore recommended that all common interest communities in New Jersey with buildings covered by this proposed law not wait to begin preparing for its inevitable passage.

Contact the attorneys in the Community Associations Department of Hill Wallack LLP for any legal assistance you may need in preparing your community for these inspections and reserve requirements.

With today’s high cost of gasoline and the growing trend to be more environmentally conscious, it’s just a matter of time before you receive your first application for approval of a unit owner’s installation and use of an electric vehicle charging station. The question is, are you ready?

Until 2 years ago, common interest community associations in New Jersey did not have to approve such an application. However, a New Jersey law went into effect on October 19, 2020, which states that “a planned real estate development shall not adopt or enforce a restriction, covenant, bylaw, rule, regulation, master deed provision of a governing document prohibiting or unreasonably restricting the installation or use of an electric vehicle charging station in a designated parking spot.” (NJSA 45:22A-48.4). The law defines “designated parking spot” as “a parking space that is specifically designated for use by a particular unit owner, including but not limited to a garage, a deeded parking space, and a parking space in a limited common element that is restricted for use by one or more unit owners.”

Fortunately for common interest communities, the law allows them to impose several reasonable guidelines and restrictions on the installation and use of such EVCS. This includes but is not limited to insurance requirements and licensing requirements of the installation contractors, as well as the requirement that an architectural change application first be is made and approved by the Association’s Executive Board.

Rather than waiting to receive your first application, we recommend all community associations be proactive and prepare now for this eventuality. This preparation includes surveying your community to determine the level of interest in EVCS among your residents, engaging an electrician and engineer to inspect your properties to gain a sense of what the best installations would be for your community, and engaging your association attorney to prepare an EVCS policy resolution (with a license agreement) for the association and its members to follow going forward.

Contact the attorneys in the Community Associations Department of Hill Wallack LLP for any legal assistance you may need while preparing your community for the installation and use of EVCS.

Posted by Eileen Garretson on May 2, 2022 in Webinar 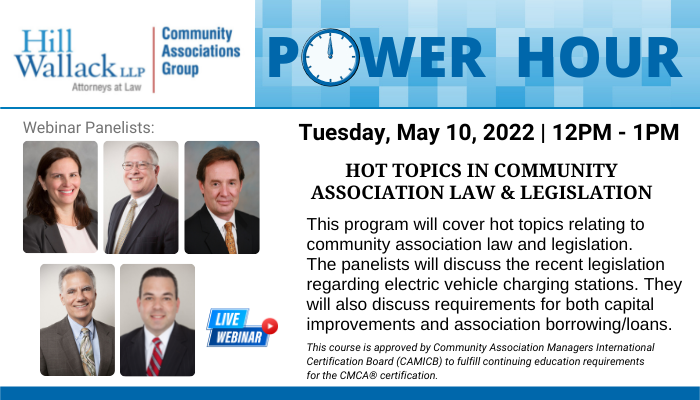 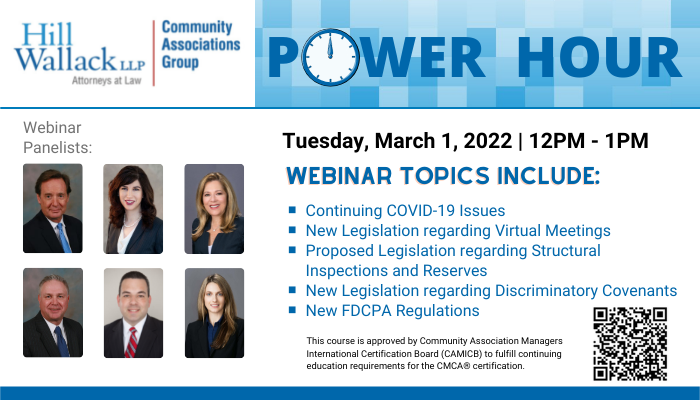 This program will cover hot topics relating to community association law and legislation. The panelists will discuss COVID-19 issues in light of the continuing pandemic, new and pending legislation regarding remote meetings and discriminatory covenants. The panelists will also provide updates on the new FDCPA debt collection regulations and the proposed legislation regarding structural inspections and reserves in response to the Surfside tragedy. Click here to register, or scan the QR code above. 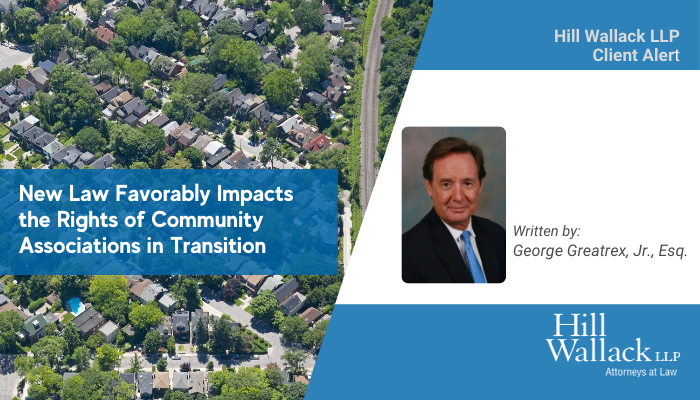 Posted by Eileen Garretson on Jan 11, 2022 in Legislation 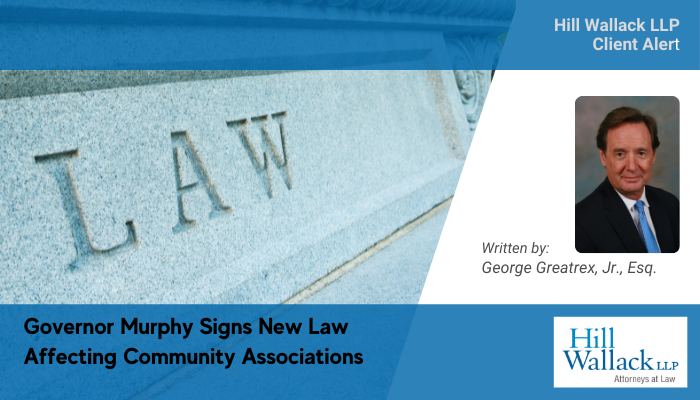 What the New FDCPA Regulations Mean for Community Association Collections 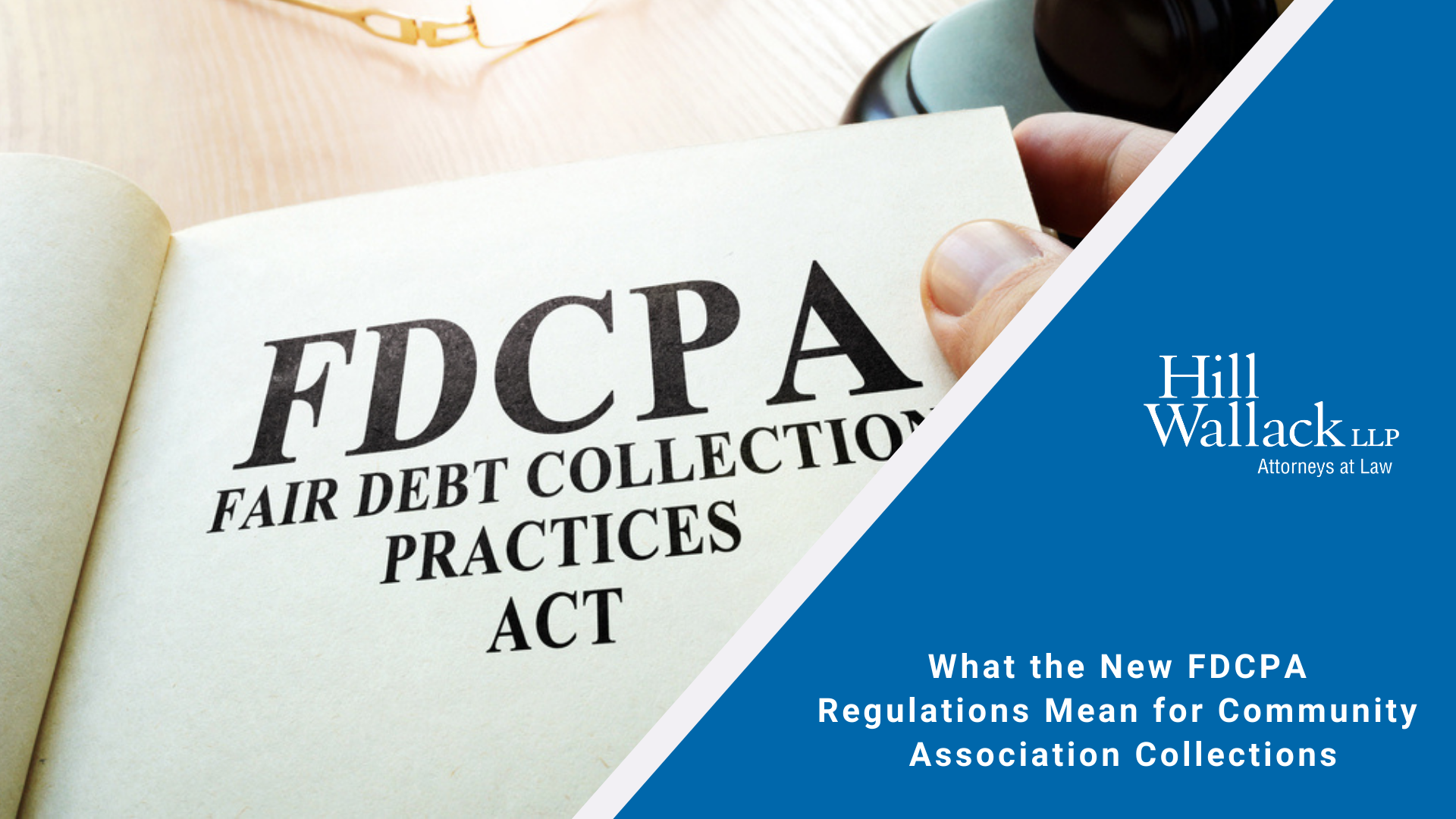 As of November 30, 2021, your community associations demand letters may look slightly different. As of that date, new regulations went into effect regarding the Fair Debt Collection Practices Act (the “FDCPA”), 15 U.S.C. § 1692 et seq.